Pasha 183, who died this week, won international fame with his beautiful murals and witty installations. Alexis Zimberg remembers the life and work of one of Russia’s most important street artists.

Pavel Pukhov, one of Moscow’s most prolific and internationally renowned street artists, died on Tuesday 2 April, aged 29. No official statement has yet been given about the cause of death. The unexpected passing of Pukhov, who was better known on the streets as P183, brought together friends, fellow artists, and admirers from around the globe to honour his life. Pasha, as I knew him, was best known for his socially critical installations and grey-scale photorealist murals. He was a poet of the streets, lauded by both his peers and the world press that made him famous by nicknaming him “the Russian Banksy” in January 2012.

But Pukhov never saw himself as Russia’s Banksy. In an interview in February 2012, he confessed that he had no intention of emulating the British street artist. In fact, he had begun to hone his craft in the Nineties, years before Banksy reached the forefront of street art fetishism.

I met him in Moscow in March 2012. He was feeling unwell that evening but still offered to speak to me as he knew that I was flying to New York the following day and that there would not be another opportunity until my next visit. Walking around the Art Play Creative Campus as the sun set on a particularly frosty evening, I quickly noticed his soft-spoken kindness and patience. Jumping between languages, we discussed the merits of street art, civic duty and public expression. He studied design while at university but thought advertising was a dirty profession because it threatened to suffocate creative freedom.

Pukhov fell in love with free expression when, as an 11-year-old, he stumbled upon Moscow’s infamous Tsoi Wall, an alleyway in central Moscow covered in graffiti and messages commemorating the life and cult following of rock star Viktor Tsoi. “I was listening to music all the time,” he told Public Post. “My parents were afraid that I would go deaf.” Gazing at the tribute to this Russian legend, the young rocker quickly understood how an artist can build atmosphere and sensed the power that accompanies that ability. Having grown up, reportedly, in a rough Moscow community, Pukhov found refuge from neighbourhood aggression in street art and learned to paint under the tutelage of Russian graffiti legends like Basket. He shared with me stories of the early street art days in Moscow when the city was an open canvas and the concept of graffiti was fairly novel. For the next decade and a half, Pukhov explored different techniques of creation, eventually learning to draw in the dark with lights and to incorporate existing environmental aides, such as Moscow’s waterways and concrete spaces.

“I am essentially a street satirist.”

Of late, Pukhov became known for grandiose installations that beautified the urban environment by bringing gallery-quality aesthetics to the streets. He also used the communicative quality of the public space to express his own nuanced social analyses. Through his lens, a stretch of barbed wire near a mental hospital became a good place for a fictional young girl to hang New Year’s Eve decorations. In True to the Truth: 19/08/91 Reminder, the swinging doors of Krasnye Vorota metro station became the ideal location for life-sized stickers of riot police, so that the everyman could let out their aggression on them without repercussion. Pasha viewed street art as a vital instrument for shaking the citizenry into reclaiming expression. He valued nuanced dialogue among neighbours and led by example in his own often intertextual communication. 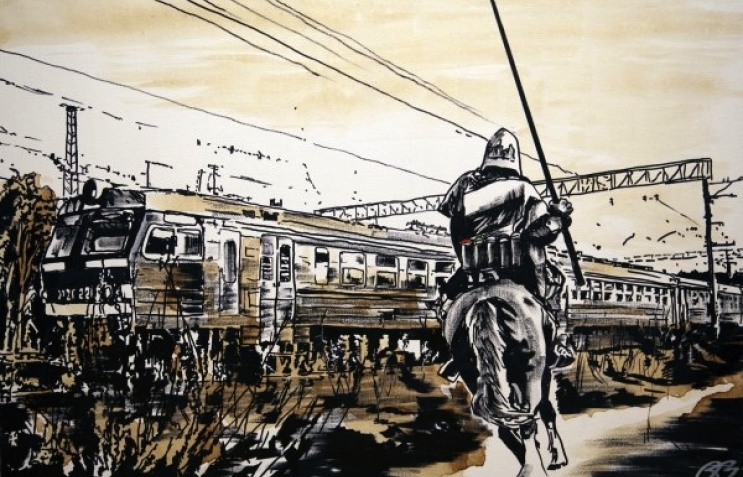 In interviews Pukhov would hint at an affinity for history and poetry by citing the painted carriages of civil war propaganda trains or the Futurist manifesto as the jumping off point for street art in Russia. “Situationism, to put it simply, is the art of revolution in the streets,” Pasha told Russia Beyond the Headlines in 2012. “I am essentially a street satirist.”

In addition to more commonly recognised pieces — the rioter with the flaming torch and the traffic jam fighter that inadvertently put Moscow’s police force on a terror alert — Pukhov has completed scores of brilliant artworks. In 2012 he covered St Petersburg in angel wings to add his own artistic spin to the city’s history as an art centre. In the same year, he and two friends turned walkway scaffolding into a gorilla cage, poking fun at the philosophically imprisoned humans traversing the metal enclosure day in and day out, only to arrive in a different sort of cage — their cubicles.  He and his friends took on the deluge of commercial advertisements that coat the ground outside Moscow’s metro exits and downtown side streets by installing the image of a man so sickened by what he sees that he covers all the ads for exotic women’s clothing or long-passed concerts with vomit. He had recently painted the set for the opera TODD, designed a segment of the Wall Project at Winzavod, and — in his final days — filled many canvases with detailed portrayals of the delicacy of life and the nostalgia that he understood so subtly. Although Pukhov’s flame was extinguished all too soon, his legacy will live on.

[Originally published by the Calvert Journal on April 4th 2013.]