In December, Post-Soviet Graffiti was featured by Vice Magazine! Click here for the original article and scroll down to enjoy the full piece.

The Silent Protest of Post-Soviet Graffiti

Graffiti is an artform with a long and rich history, from its use as a marketing tool in the 9th century by the Rurik Dynasty, to the graphic and sexually-charged graffiti of Ancient Rome. “The reality is that humans have probably written on walls, on trees, and on rocks since we realized that we could,” says Alexis Lerner, director of the website, Post-Soviet Graffiti. Lerner started the website in 2011 as a means of creating a dialogue about “free expression in the censored or authoritarian states of the post-Soviet region.” It advocates for street art and graffiti with an element of activism in a region fraught with censorship.

Lerner became interested in graffiti at a young age. “As a Sharpie youth,” she says, “I covered every surface that I could with geometric patterns and bubble letters that fit together like puzzles. So perhaps the aesthetics of street art always made sense to me. And, as a lover of political science since my teens, the passion of protest always appealed to me.” 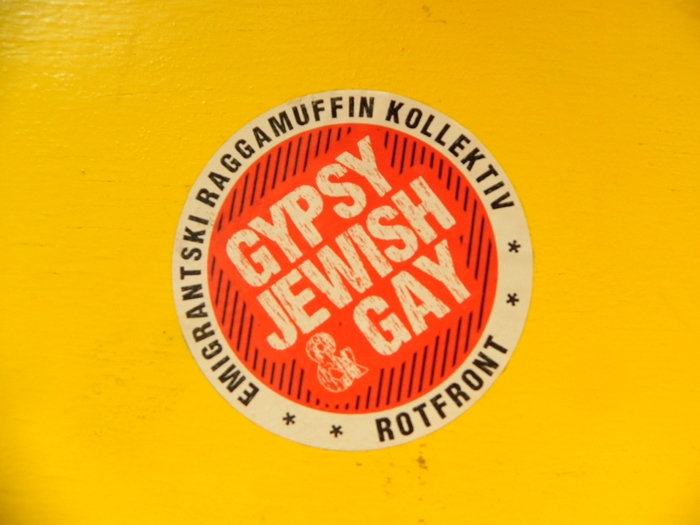 During the Iranian Twitter Revolution, Lerner was living in Saint Petersburg and bore witness to an overwhelming apathy—the notion that nothing revolutionary could ever take place in Russia. The high level of censorship seemed an accepted state of mind, but soon she began to notice an undercurrent of discontent. “I used to walk the same route to school every day,” Lerner said in an email to The Creators Project. “I would pass the same alleys and the same walls to watch the art change. One day, I would see a stencil advocating for activist Artem Loskutov, the next a pro-Kremlin wheatpaste promoting public health. Anti-fascists and xenophobes, constitutional activists and Tsarist historians; they were all there behind mask and pseudonym. In Russia, it seemed, street art was used as a tool to circumvent censorship.”

She deeply believes that street art, which she says encompasses graffiti, can be used as tool for change. “What about the artists in my hometown Detroit who used to paint abandoned buildings sunrise-red so that drivers stop avoiding them from the highway on their commutes into the city? And what about the artists in Minsk who paint in abandoned parking garages about the freedoms outside of Belarusian borders? What about the Berlin artists who used to give squatters something extraordinary to look at when they left their tents in the morning? These are true community builders and true artists; I believe that some should be recognized as such.” Her work with Post-Soviet Graffiti preserves the continued efforts of these such artists, and strengthens the mission of an activist voice in a censored society.

When asked about contemporary street art activism, Lerner mentions the recent posters in Paris during the climate talks as a form of “soft activism.” She says, “This sort of art activism is popular worldwide, from Paris to Chicago, Moscow to Buenos Aires. Art activism generally has a post-materialist bent, in that it addresses soft political issues like the environment, free speech, racial equality, sexual diversity and so on. I say soft because, generally, you don’t see this art activism calling for palace coups.”

Lerner is a vocal advocate for a largely underground movement. Her experience in an authoritarian state at a time when cultural revolutions were happening en masse gave her the unique perspective to see the fissures of activism fighting oppression. It also allowed her to develop an informed and persuasive voice for an art form that is generally relegated to the fringes of society. She concludes, “I saw graffiti writers openly criticize political leaders, denounce questionable business practices, and organize massive demonstrations against perceived corruption. I see secessionist regions call for independence and marginalized minorities demand justice for past wrongs. Victims of hate crimes are eulogized and political prisoners are defanged. Who needs a Twitter revolution when the streets are alive?”

Below, Lerner discusses some of her favorite street art activism from the past few years:

“Russia’s leaders often maintain a celebrity-like status, even long after their death. Frequently, Russia’s street artists illustrate these historic figures in their works—a practice that visually reinforces the role that history plays in Russia’s contemporary political and cultural arenas. At Moscow’s Vinzavod, one artist acknowledges the memory of Tsar Nicholas II by placing the slain leader’s head dishonorably onto the body of a mythical, bird‐like, claw‐footed creature. Two courtyards away beneath a trainyard underpass, a wheatpaste piece illustrates Vladimir Lenin standing in Red Square asking Vladimir Putin to lie with him in the immortal tomb, again reflecting the celebrity-like status that Russia’s leaders maintain even long after their death.” 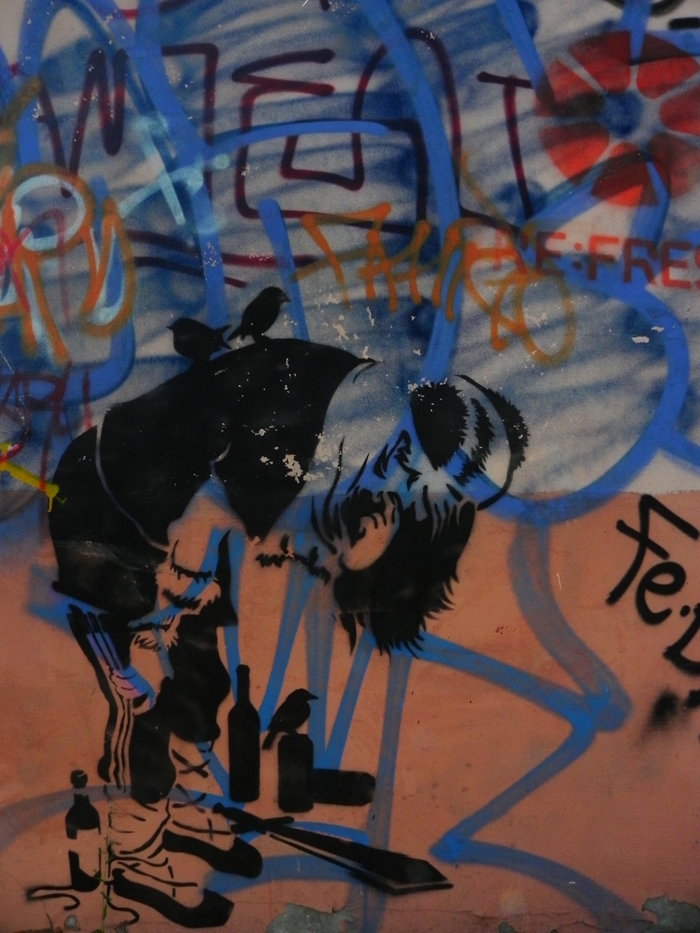 “Lāčplēsis is a mythical legend for Latvians. The Paul Bunyan of the Baltics, he stands high above our heads, wears skins and furs of his own making, and is the trusted friend to all of Europe’s forest creatures. Lāčplēsis, the  bear-slayer, leads his people into battle and wins the hearts of the most sought-after maidens in Riga. With alcoholism at a steady high for regional males, the vomiting folk hero is a criticism of the weakened and intoxicated Latvian national identity.” 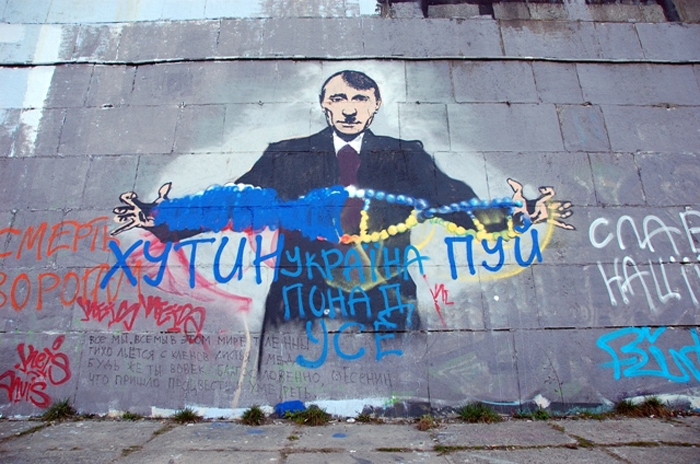 “Putin is made to look like Hitler in this Kyiv mural. He’s holding the DNA of Ukraine and Russia within his hands, but another artist has painted over the Russian colors with Ukrainian blue, an act of subversion in deeply divided Ukraine.”