Post-Soviet Graffiti December 16, 2014 2 Comments on The Politics of Post-Soviet Street Art: an Interview with Alexis Zimberg 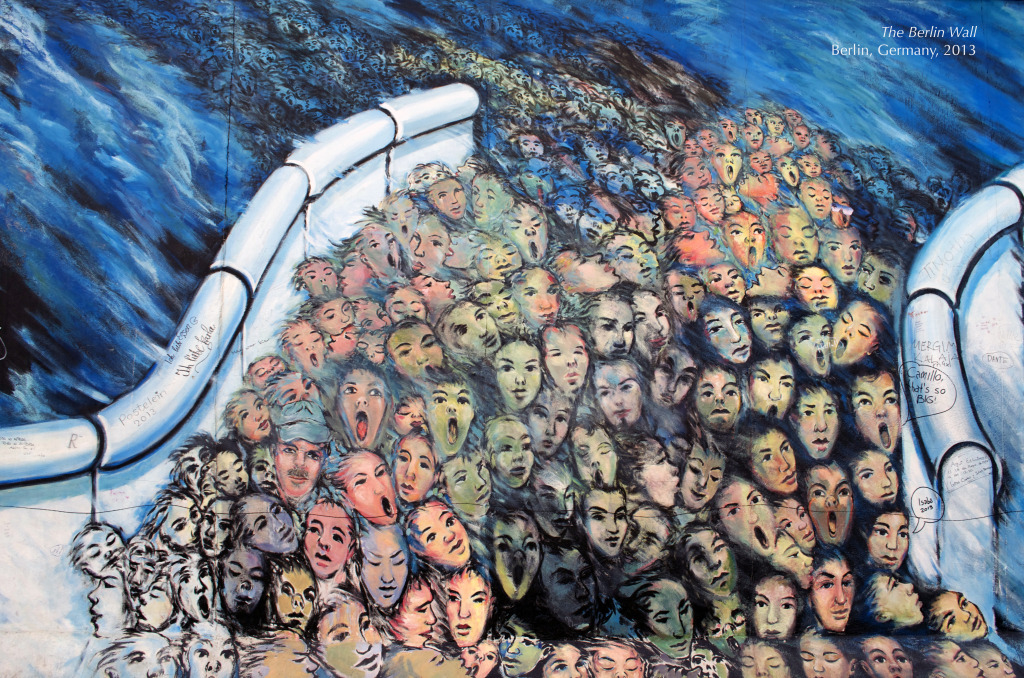 Article by: Colleen Wood, Originally published to Muftah.Org on 3 october 2014.

Post-Soviet Graffiti is a research blog that investigates, amplifies, and advocates for free expression in states of the post-Soviet region, which censor media and speech or are fully authoritarian. Its director, Alexis Zimberg, (@PostSovietGraf), is a PhD student in Political Science at the University of Toronto whose work has been featured worldwide in contemporary art, political, and academic publications, including Foreign Policy Magazine, Radio Free Europe/Radio Liberty, and the Calvert Journal. Muftah recently had an opportunity to talk with Alexis about street art and political expression in Eastern Europe. The following interview has been condensed and edited.

Your blog is about street art, but it is also about politics. How do you balance aesthetic and political study?

Alexis Zimberg (AZ): It is a form of political analysis that turned into art because that is where the project wants to lie. This is a project about where desperation leads. When people don’t have free access to the media and cannot express themselves in other ways, it leads to street art because it is is anonymous and accessible. It’s funny – I keep getting grouped into these art circles. People try to tell me that I’m an artist, and I have to tell them no, I’m a political scientist. Although, I did do some art and photography exhibitions – but it was an entirely different creative process.

Why do people turn to street art to express themselves?

AZ: Look at it this way: you’re artistically-inclined, and you want to talk about a problem. So you go out with a megaphone. But that doesn’t work, and you get put in jail. So you go out in the streets and decide to wear a balaklava on your head. But that doesn’t work, and you get sent to the gulag. Now you decide to write a blog post, but your IP address is traced and the Belarusian KGB shows up at your door. The anonymous factor of graffiti is what protects people and allows them to be so honest with their opinions.

Everybody has access to a marker or paint or a spray can, and they can write something on the walls. This makes it a very democratic art form and way of speaking. This means that people can say whatever they want – even if that person is racist or anti-Semitic or dislikes Putin or hates war. These people don’t always have a voice in mainstream media. Anytime there’s a power struggle that’s not getting an outlet, I think it come out in the streets. 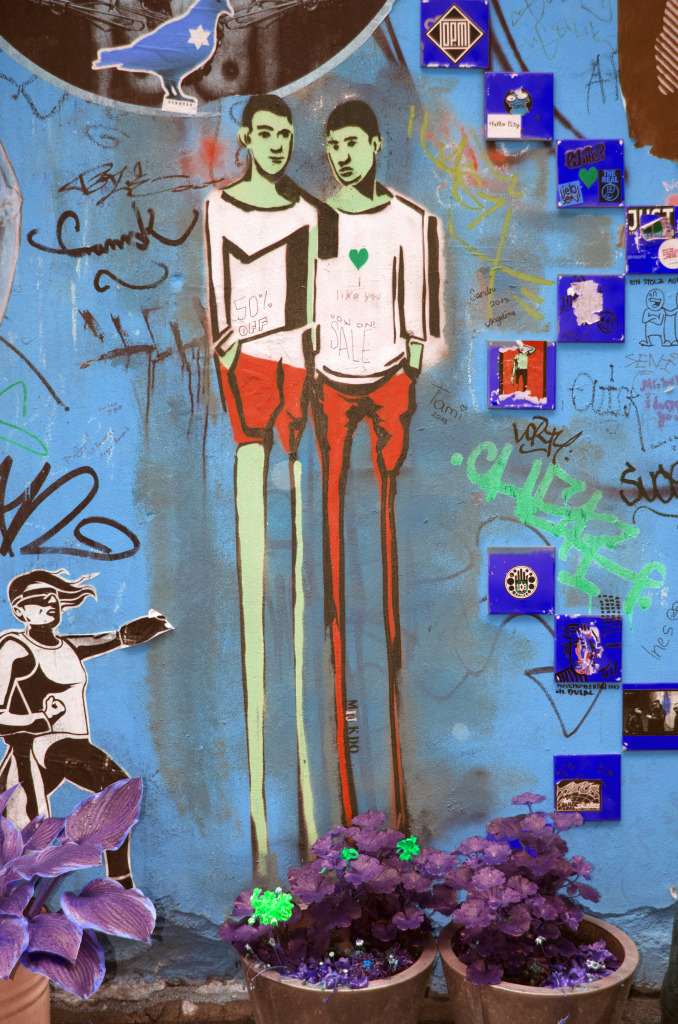 What are the advantages of using street art? What makes it a unique medium?

AZ: When you have a rock group singing political songs, their message is pretty clearly one-sided. With graffiti, though, you can have people draw over it, add different words, and it becomes a discourse. Sure, there’s discourse on the internet. It might be anonymous, but it’s not safe – the government tracks it. Graffiti’s discourse is unique to the art form.

One example comes to mind. There’s a brick wall near a metro station that was painted with a portrait Putin with a comb-over and a mustache, as if he’s Hitler. Next to it, there’s a piece of DNA that is half Russian and half Ukrainian colors. Someone wrote underneath it “Get lost!” and another person crossed out the Russian colors. That’s discourse.

What is the ultimate end of street art? Does it serve a cathartic purpose, expressing frustration? Can art exist for art’s sake as something beautiful?

AZ: It’s a way of expression that’s not just aesthetic, the way you might see in freer states. There’s a sense of urgency in Eastern Europe that I haven’t seen in other cities – Montreal or Detroit – as much. You don’t see people scribble their own names. You see people writing about political prisoners, freedom, human rights violations, police brutality.

But street art is about more than just voicing opinions. In Moscow during the presidential elections in 2012, I saw a lot of signs like “Come here to Bolotnaya Square at 6pm,” and someone had crossed out 6 and written 7. Meanwhile you’re checking Twitter to follow up on where the protests are and what the opposition is doing. One piece of graffiti might have the link to a LiveJournal (it’s very trendy nowadays in Eastern Europe) that gives more details about where to go and how to get involved. Street art is a mobilization tactic.

What dangers face an artist who makes graffiti?

AZ: The man who claimed to have climbed a skyscraper in Moscow and painted the star with Ukrainian colors got out of the country. He’s not in Russia anymore. That’s surprising, and I’m shocked at the force with which the government said they would come after him. The police definitely go after graffiti artists, but in the past it was often possible for artists to pay their way out of a situation. This crack down is something very new. There’s a major crackdown happening on public expression. This is not just in Russia and Ukraine, but also throughout the more totalitarian areas of the region, like Belarus and Hungary.

The Russian government has paid trolls to shut down public expression on the Internet. Do you see evidence of trolling happening in street art?

AZ: In St. Petersburg, I used to see a lot of stuff about engaging in sports, not sitting at home and drinking, not smoking cigarettes, going out and being part of a productive civic community. I thought this was really strange, but artists told me that there are people paid by the city to put this up. The Kremlin doesn’t pay people to troll and write “Putin is the best in the world!” Instead, there are some state narratives about what it means to be part of a solid, strong community.

People are very apathetic when they think about changing political leadership, but they remain very optimistic about the possibility of influencing their fellow man. While people might not think of themselves as politically critical, they see themselves as socially critical. The idea is that if you can influence your fellow man, you can influence political leadership. The needs of the people will change and they’ll elect someone different.

You see Misha Most, a well-known Moscow street artist, post up the section of the constitution about freedom of speech, he says it is just because he wants people to know their rights and know their constitution. He says it has nothing to do with the Kremlin inhibiting freedom of expression, but rather because people don’t know what has been promised to them. People who claim to be socially, rather than politically, invested have plausible deniability. They say, “I’m not political so you can’t arrest me!”

Russia seems to oscillate very quickly between being very open and not so open. Just nine months ago, Moscow was clean and everything was exciting. They had just let Mikhail Khodorovsky out of jail, the girls from Pussy Riot out of the gulag, and everything was changing. But then the Olympics happened in February and the situation totally changed in March. There’s been a major crackdown on expression.

What hope is there that the attitudes of Eastern European governments toward freedom of expression will change?

Over the years, I’ve seen and been a part of so many protests and mass demonstrations that seemed so strong. It’s hard to be hopeful when those failed. March 2012 was literally the only time I saw explicitly anti-Putin graffiti, like “Putin your time is now!” “You’re an embarrassment to your people!” It was such an inspiring and exciting time, but it didn’t go anywhere because there wasn’t a viable leader. So, I don’t really know, but I hesitate to have much hope.